A few new pigs by LovePiePenBrinck appeared in Shoreditch this week and on the tour, an old secret piggy was discovered.   After pointing out some of LovePiePenbrink’s Piggys to tour guests yesterday, a pair of guests later on gave us the news that  they had spotted another piggy hiding in a little niche as we walked past.  After the tour, it being a lovely afternoon, I took my camera out to do some photography and found that same pig. I was amazed to discover from LovePiePenBrink’s photographic chronicle that this piggy was put up in 2012, 4 years old and I hadn’t spotted it before.   Here are a couple of pigs spotted in the past week.

It was a very busy weekend for new street art, Mr Farenheit was prolific at the end of last week (he always is!). The next stage in Dr Cream’s epic street art animation was placed on Shoredtich streets this weekend.  On Sunday the tour actually came across Dr Cream pasting his animation sheets on a wall in Shoreditch.  Dr Cream gave the group a fascinating insight to the overall concept of the animation he is working on, hopefully when the full thing is completed we can write a bit more at that time. On Saturday we saw some street art in the novel form of A-Frame boards relating to the UK’s forthcoming referendum on its continuing membership of the EU market, the first street art we have seen explicitly referencing this political issue.  The character on the first board is Nigel Farage, in the second it is Boris Johnson.  The poster is a play on the title of  Banksy’s 2010 street art documentary “Exit Through The Gift Shop” and both characters are wearing the star shaped glasses worn by the rat which promoted Banksy’s film.  The message to UK voters seems to be when you choose your position on this issue, beware who else is in your tent. Brexit Through The Gift Shop with Boris Johnson, artist unknown 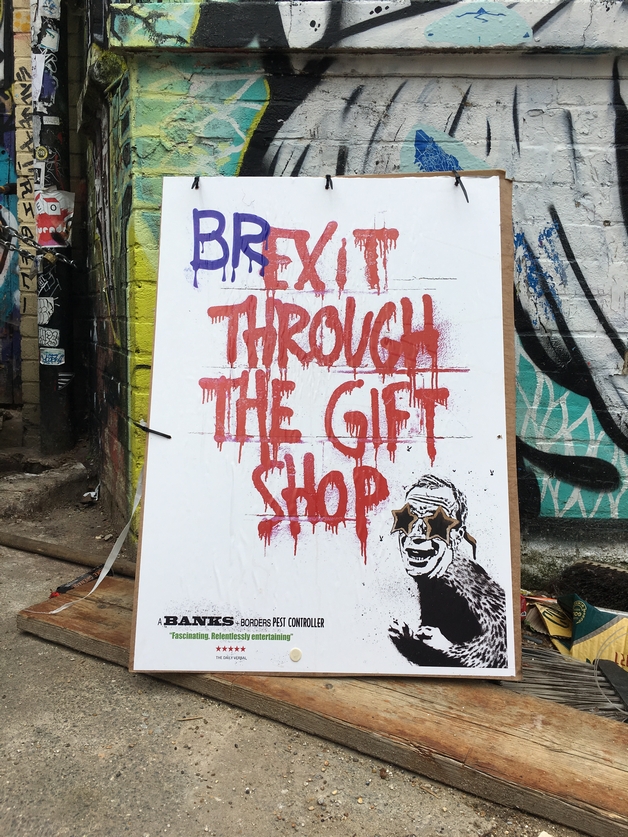 Brexit Through The Gift Shop with Nigel Farage, artist unknown

Nice to see some political street art in what are very interesting times.