It’s that time of year when we look back over the constant evolution of the art hanging on the walls of the world’s premier street art location, Shoreditch.  It has been a phenomenally active year with an absolute kaleidoscope of exterior decoration rendered with new stencils, paste ups and murals appearing every day .  It is an impossible task to try to summarise everything that has happened so just for fun let’s have a look at how the appearance of one  specific wall has changed throughout the year.

Brick Lane’s Preem Restaurant has hosted a phenomenal collections of fantastic street artists for quite a few years now on its side wall on Hanbury Street. At the start of 2017 a curious hybrid piece existed.  Its life started in October 2016 when Bault from France painted brilliant colourful spiky spidery set of creatures.  In November 2016 Lora Zombie took over part of the wall, splitting Bault’s masterpiece into two disconnected panels.  ThisOne painted a mural over one of the residual Bault portions. 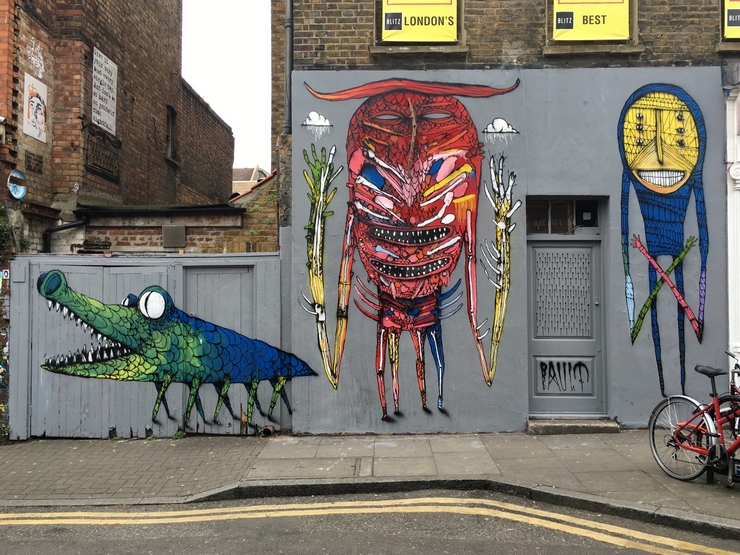 It stayed that way until March when Dale Grimshaw painted an awesome Papua New Guinea tribesman. A month later we were shocked and stunned to see an advert appear over a significant portion of Tielmo Miel’s work.  The wall owner was not happy and it was definitely not a favourite of ours.

After that experience, the wall deserved something really special and got it in very early December when David De La Mano from Spain created his powerful piece called “The Wave”, one of our favourite murals of 2017. Very very few artists could have replaced David de la Mano’s piece with something at least equal in stature but right at the very end of the year, in fact over a period of about 4 days which spanned Christmas Day, Fanakapan painted “Follow The Leader”, a painstakingly brilliant political piece aimed at Donald Trump on that very same spot.  Fanakapan is one of those artists who stunning creations could possibly follow David De La Mano. The final painting is the gorgeous mural chosen to feature at the top of the page and that is the way the wall looks as we tick over from 2017 to 2018.

So there you have it, a year  in the life of one wall.   Thanks to the owner of Preem Resstuarant for allowing use of his wall, thank to the artists too who bestow the street with their creative endeavours and thanks too to the unseen hands who organise and coordinate the art activity on that wall.

We will doubtless see many more great creations on this wall and in many other spots in Shoreditch in 2018, remember you can follow the day to day street art that we enjoy through our instagram account.   Shoreditch Street Art Tours wishes everyone a healthy, productive and  creative new year for everyone.