What has New York street art got to do with Shoreditch?  Well loads actually, as New York is essentially the birthplace of graffiti who’s travelling mutant offspring led to Shoreditch becoming the spiritual home of street art. 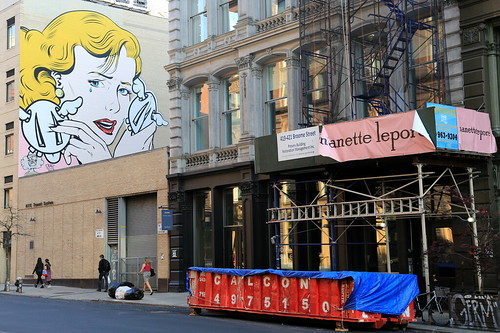 New York hosts a glorious city-wide panorama of ever changing street art and graffiti and in my opinion its foremost photographic recorder is Katherine Lorimer, known to many as Luna Park. 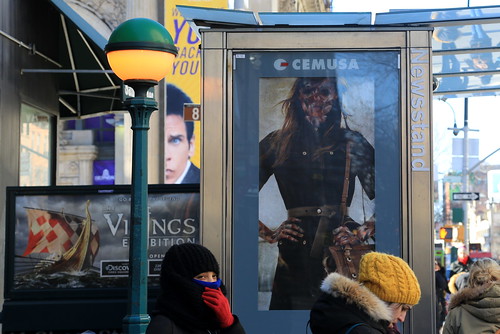 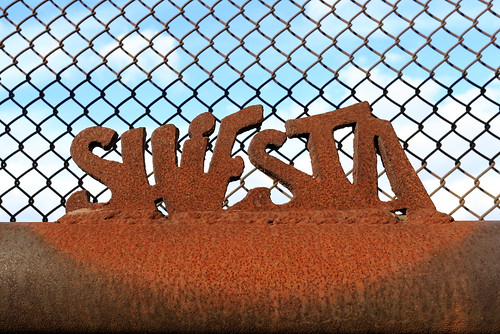 Katherine’s book launches this Saturday, October 22nd in New York with a launch event hosted at 17 Frost Gallery in parallel with a 10th anniversary showcase for Ad Hoc Gallery.   NY readers should definitely make this a “don’t miss” event in their diary. 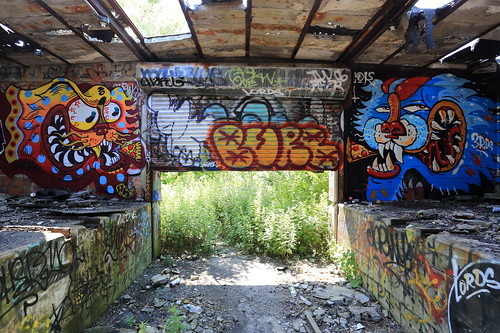 Folks from other parts of the world may have to satisfy themselves with obtaining a copy from their favourite book store but if you are a lover of street art, don’t miss out on this book. 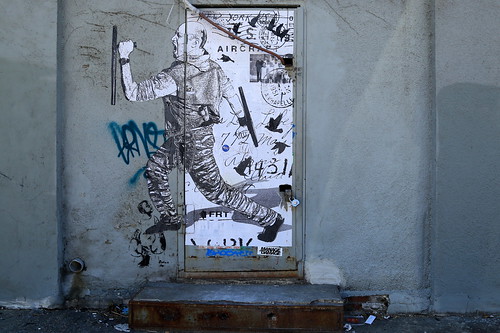 I have taken the liberty of linking to a few of Luna Park’s recent photos from her Flickr account, not from the book.

A little “PS” – the Ad Hoc show should be worth seeing, Garrison Buxton, the guy behind Ad Hoc Gallery which in those days had a physical presence as one of NY’s leading urban art galleries had an exhibition in London’s Pure Evil Gallery in 2008.  I recall Garrison had firm views on the need for street art to take a political stance. This show at 17 Frost sounds like it should be interesting, another reason to go! I was fortunate in 2012 to attend the Moniker Projects screening of Steve Powers’ film of the same name and the Cedar Lewisohn hosted Q&A session with Steve Powers after. I believe this may be the only time the film has been screened in the UK.   Many guests on the Shoreditch Street Art Tour will have heard our synopsis of the plot and how it is connected to Steve Powers’ still running “Let Us Adore and Endure Eachother” London love letter. I was particularly struck by words written by Steve Powers at the back of the book in which he laments the disproportionate 8 years in state prison for 18 yr old Sebastien Perez and 19 yr old Ralph Mirabel, my views on the obscene sentence handed down to London writer 10Foot have been covered before on Graffoto but nothing I wrote matches the eloquence and target smacking punch of ESPO ICY’s words:

“The marks they made will fade before they get out, but their lives are completely and irrevocably vandalised [emphasis mine] by an unrepentant tagger named justice.”

D*Face has an almost peerless right to be regarded as father to London’s street art scene and guests of Shoreditch Street Art Tours will know that I position him as globally significant.  This great new self penned book lays out clearly the evidence to justify those garlands.

D*Face “One Man And His Dog” Book

There are plenty of stories lifting the curtain on D*Face escapades which make fascinating reading, such as the driver turning up to deposit six 1 tonne poured cement spraycan sculptures around central London tourist spots wearing a German army officer’s hat with plastic doll’s legs sticking out the sides. The 2010 installation of the Zombie Oscars in Hollywood struck me at the time as one of the ballsiest illegal street piece installations and I am not sure there has been much to challenge that status since. Few of the revelations are quite as astonishing as what D*Face’s wife carved in ice on a 2006 trip to the Arctic circle but you’ll have to read the book to get that little nugget!

Banksy is eventually mentioned as a friend, partner and collaborator though one gets the impression that D*Face remains a little sore at Banksy’s sudden universal withdrawal from social contact in 2007.

There is a revealing anecdote regarding a war dividend painting he did on a building site hoarding which featured a collage of corporate logos of companies profiteering by securing privileged post war access into Iraq.   An advertising agency who claimed to like D*Face’s work were a bit put out at their client’s logos being corrupted in this way, so their course of action options were Plan A follow a due process, engage lawyers, issue cease and desist letters, follow up with compliance and enforcement notices etc, or plan B, send down a young girl on an internship with a roller and a bucket of paint and have her paint  it out.   D*Face’s self confessed anger overwhelms any admiration of the ironic “do it yourself” punk approach the agency adopted!

“I thrive on the visual, ephemeral feast that surrounds us City dwellers, from the overlaid and torn flyposters to the tagged doorways, the jammed rotating billboards displaying parts of two adverts at the same time and the chopping of sounds I hear while cycling through traffic.  I am naturally drawn to my visual environment.”

At several points we get a sense of the inherent conflicts of being a street artist, a gallery artist and a gallery owner, particularly where it comes to relationships with the law!  In 2008 I was intrigued by D*Face’s switch to showing with Black Rat press and in the book we now learn that showing with an outside gallery frees D*Face to concentrate on producing the art and secondly, Black rat offered a step enhancement in screen printing refinement above and beyond what had become the Pictures on Walls standard in-house product.  The resulting “aPOPcalypse Now” was a stunning show that I found simultaneously mesmerising and disorientating (pics here). Having said the book reveals all, there are perhaps a few things curiously overlooked.  Apart from a note in the shouts at the back I didn’t find any mention of the 2003 Finders Keepers exploits.  I’m going to extrapolate, infer and guess a bit here but Finders Keepers was about the punk do-it-yourself approach, some of the key Finders keepers members have recently shown with Stolen Space and appear to be still in touch with D*Face, others plough a far more independent, righteous and outside-the-system furrow quite distant from the path D*Face has followed, so perhaps there is some breakdown of the old intente cordial there.

There is even a full page sticker kit, I wonder if anyone will ever be mad enough to remove the stickers..just keep the book out of the hands of 5 year olds. In among all the material which revives memories for me of stuff I lived and experienced as a fan looking in from the outside, I was surprised to find strands to D*Face’s work which I have no recollection of, such as the butterflies and insects which are clearly influenced by Damien Hirst.

“Trying to explain to US border police why you have an industrial drill with you for a holiday is no easy task,”

If you like the work of d*Face or have found this review interesting, you might like to do a little time travel and see a bit of previous stuff written by NoLionsInEngland (ok…yes, that’s me too!) on the door closing 2013 solo show at the old Stolen Space premises a,d, as noted before a small number of my flicks from the 2008 aPOPcalypse show are here.

This is a large and heavy book, there are hundreds and hundreds of fascinating photos in there of both outdoor and indoor work.  Clear some shelf space and pick up a great read.

Book photos copyright: as stated in the book

Photos NoLionsinengland except where noted