When I first began to explore street art one my favourite artists was and indeed still is French stencillist Jef Aerosol.  This Aerosol masterpiece was on Hanbury street and marked more or less a the time that this wall was just beginning to be used for permissioned murals. Shoreditch street art was dominated by stencilism in the 00s and why not, Banksy was the stencil artist kicking down the doors of public disinterest and general hostility.  K-Guy was and again still is a great personal favourite.  This is his take on the dual significance of the national flag, a symbol of pride yet also racism. The next photo shows K-Guy’s artwork in context.  In 2007 Shepard Fairey hit that spot with a long lasting paste-up (a spot he returned to in 2012).   Sotheby’s and Bonhams started their urban art auctions in early 2008, others then hitched to that bandwagon.  This was probably the first occurrence I came across of an arts related organisation destroying a piece of street art in pursuit of advertising.  This shit still goes on and basically if you see street art being damaged in pursuit of the commercial interests of galleries, auctions and online sellers, then it’s a clear sign the fuckers do not get the culture, steer clear. Special Offer: Free Art! The stencil on cardboard below was a piece of free art by the prolific, varied and much missed street artist Mr Farenheit. Hopefully it went to a good home. This doorway in fact the whole building, now demolished, was always intensely distressed and beautifully decayed; muscular rust on the iron door had very little sympathy for any paper pasted onto its surface. “Special Offer” is a detail from an ACE paste up; the thick black bars emerging over Twiggy’s left shoulder are a Paul Insect relic; D7606 also did great paste up montages on this door and it’s a rare photograph where you can’t see one of his pieces at this spot. 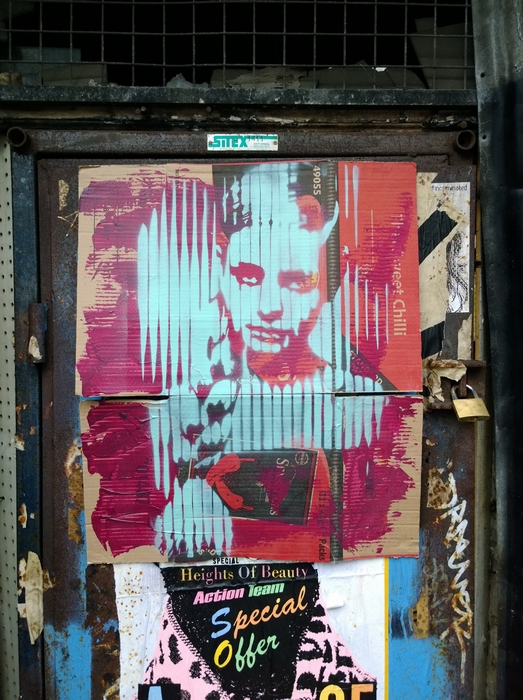 The pair of birds in the next photo by artist and graffiti writer Dr Zadok are done in the swirling style which characterizes both his graff letters and his art.   Alleyn Gardens habitués will note the virgin brickwork on the then relatively new North London Line. The image below shows Dr Zadok’s hand finished bookcover in aid of Joe Epstein aka LDNgraffiti’s fundraiser for Great Ormond St Hospital.    More details and information about how you can to support the fund raiser and maybe win one of these fantastic prizes in the #LDNGOSHLottery is HERE.  Keep an eye out on LDNGraffiti’s Instagram for further announcements of more prizes. Swoon again, simply because she rocks.  Close to Broadway Market, 2011. Borondo was an extraordinary painter who lived in London for a number of years in the early part of the 00s.  His impressionist murals channelled the effect of strong colours but he first appeared doing single layer portraits created by splashing emulsion on the outside surface of glass windows then etching imagery into the paint with a fork.   Two artworks survive, the “11 Apostles” on the Bull in a China Shop on Shoreditch High Street as appears in the featured image above is easy to find.  This pair of figures from 2013 play with the window frames; the scraped paint has settled like frost on the window ledge. And now, something consigned to the archive in just the past fortnight  !Things turned a brighter shade of orange across a locked down (ish) Picadilly Circus as the iconic illuminations displayed a charity digital artwork by Stik.  Stik must be alongside Shep Fairey and Banksy in the ranks of street artists who most consistently use their art for deserving causes.  This installation was in support of Young Westminster Foundation. Stik is also one of the 9 street artists who have joined Joe Epstein to raise funds for @GreatOrmondSt Hospital.   Each artist has created a special version of the book by hand painting the cover, so that’s 9 unique versions of the book.

See HERE for a blogpost with more images, details and link to how to support the fund raiser and maybe win one of these fantastic prizes in the #LDNGOSHLottery and keep an eye out as well for further announcements of more prizes. We didn’t clap for carers in the UK this week, the mood switched more to pressurising the government to fund the carers properly, and reward them not to mention try a little bit of planning for a change as a second wave is held likely.   Seems like a good moment to shelve Diggin In The Archives, though it has been a happy accident of exploring my own archives and memories and so don’t rule out DITA’s resurrection sometime.

Check out the previous Diggin’ In The Archives weekly compendiums starting with week 1 and then hopefully navigate the index to find the rest: DITA 1

It’s a lovely little piece, the photos look stunning and we hope that we won’t be around in 1000 years to see if our prediction for future story telling is accurate.

Just for fun, here are a couple of bonus photos of two moments related in the Speak Media feature;