Otto Schade has revisited a wall in Shoreditch that he used to paint frequently until abandoning it to paste up street art for a short while.   Yesterday afternoon he returned to that spot and painted a new composition featuring Freddie Mercury and Michael Jackson reacting to a rat that has appeared on stage. The last time Shoreditch Street Art Tours blog updated on Otto’s street art was February 2015, a look back at what Otto has done on that one spot since then is overdue.  In February 2015 our last update ended with Otto creating this piece with the kids turning the tables on the kid’s entertainer: That piece endured pretty well though by March 2017 it had suffered a few indignities. Otto swiftly addressed that mess with greedy or desperate hands grasping at money distributed by a scarecrow. That didn’t last too long, replaced by “David vs Goliath” in June 2017 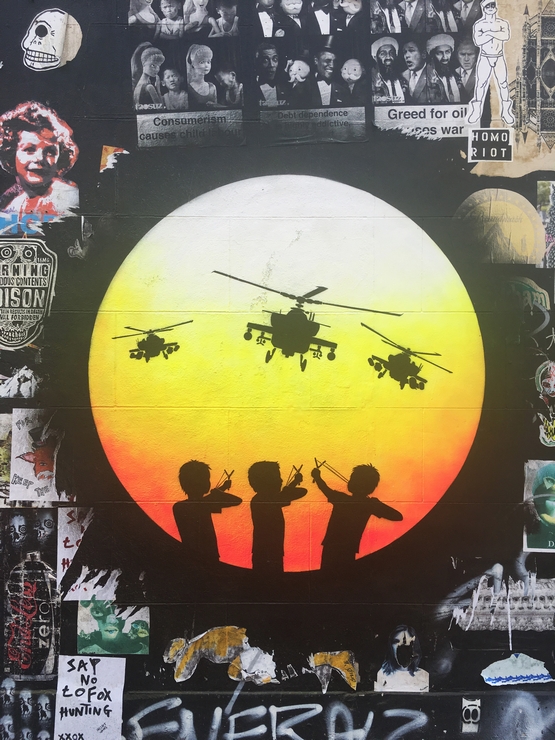 That was taken out in August 2018 by someone holding a grudge against Otto, so Otto painted “Flies around shit” about giving vast military power to mindless idiots who might use it with reckless abandon. The next update in March 2018 reflected on the impact of technology in turning citizens into passive voyeurs. Then in October 2018 Otto somehow anticipated the impact drones would have on London airports in December 2018 when they caused the closure of Gatwick for 3 days resulting in the cancellation of hundreds of flights. This lasted pretty much until May 2019 when a large throwie (tag) went over it followed by multiple paste ups,  in this image most notably Laup Nosnibor. It was a little puzzle that after such prolonged use of he same spot with some many changes that Otto appeared to allow it to drift for over half a year but now normal service has been resumed. When can we be sure Spring has sprung? When muralists flood the streets? When I can do a whole tour without thermals and a heavy jacket? This Easter Bank holiday weekend saw a great uptick in the art being created on the streets. The graffiti legend GARY of MS (Mad Society Kings) crew and letterform princess Lilly Lou found a damn good reason to go out writing on Braithwaite St on Sunday. On Saturday afternoon one of our tours had the pleasure of chatting with Shoreditch’s favourite Chilean street art Otto Schade as he painted a complex ribbon figure in the Old Turman Brewery. An unknown artist created a couple of quite incredible stencils, the accuracy of the stencil cut suggests perhaps laser cutting and the message is certainly one for the geeks. Intellectual criticism of a street artists endeavours can be blunt and direct at times, this “feedback” on Friday night on Bambi’s bikini clad figures painted last December pulls no punches.   (more about Bambi’s piece here) In keeping with the Easter theme, Horror painted this drippy chick off Brick Lane. A wonderful tribute to an author whose work we loved appeared on the old Shoreditch Tube Station and Jim Vision’s work received a huge amount of coverage in the press. Scale isn’t everything in the world of street art, we loved this tiny mixed media sculpture and sticker piece stuck on a window ledge. And it does look like the temperature is climbing into double figures at last so all the signs are that Spring has indeed sprung (but I’m not going to be fooled, warm clothing remains a la mode). 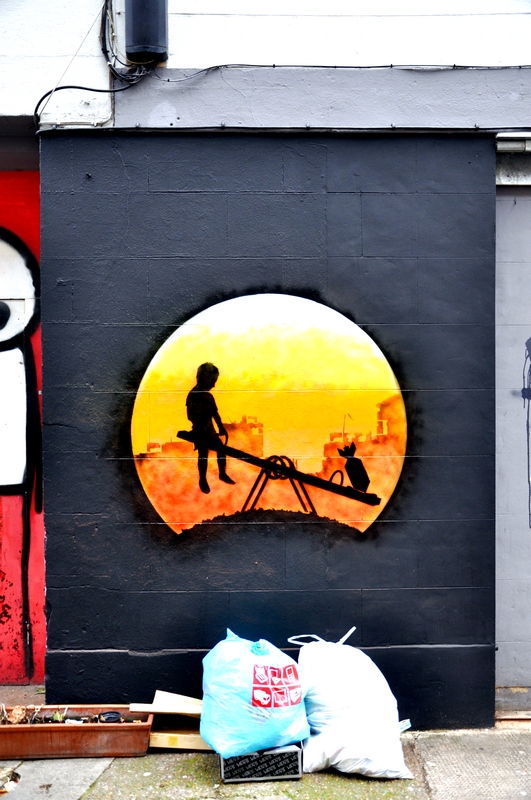 Judging by the “vote me” messages in my email inbox it must be the time of year when bloggers seek “blogger of the year” titles.  Shoreditch Street Art Tours is proud to announce it has been blessed with its first (publishable!) accolade this season, our blog tops ShoreditchInshort’s  5 best blogs they would recommend concerning Shoreditch.   Wooo hooooo, we are pleased and honoured, thank you very much Julie, author of that very discerning blog. We like to illustrate our blog posts with relevant and beautiful photographs but a screengrab of our own blog on this occasion would be a bit, well, tcky and redundant.  So, as we love Shoreditch’s street art AND a new issue of Very Nearly Almost magazine is launching this week, we thought we would celebrate with some of the photos submitted by NoLionsInEngland to VNA which didn’t make the cut.  We won’t be betraying any confidences if we say that for each edition, VNA’s content gurus looks through about 20 or so images we select and generally publishes 4 or 5 in the magazine.  This leaves us with a number of photos which then generally don’t see the light of day but are too nice to be totally forgotten.  Enjoy these photos, more information about the launch of issue 29 of Very Nearly Almost to follow shortly.