In our regular street art updates we have talked a couple of times about disappeared ancient Space Invaders reappearing, the so called “Reactivation”.   We were very lucky to secure the first ever interview with the UK Reactivation Team, check my other blog to see how and why these passionate extra terrestrial art restorers are doing what they do. Bonus news – back in 2012 I was fortunate to be in a select audience for a one evening only private showing in a London hotel of a 24 minute documentary made by Space Invader.  It was an exciting little movie about his attempt to send one of his Invaders into space and film the result.  This week Invader has finally released the documentary to the public and it is very interesting.

Guests on a tour a couple of weeks ago will recall the excitement of spotting a curious new Space Invader sticker. Over a classic Union flag invader was the legend “Reactivation Team UK” and the motto #protect_them.  A little bit of digging resulted in finding 5 Space Invaders which have been “reborn”, in other words they are old classics which had disappeared from their locations due to the ravages of time, authority, disgruntled property owners or plain old sticky fingered fans. 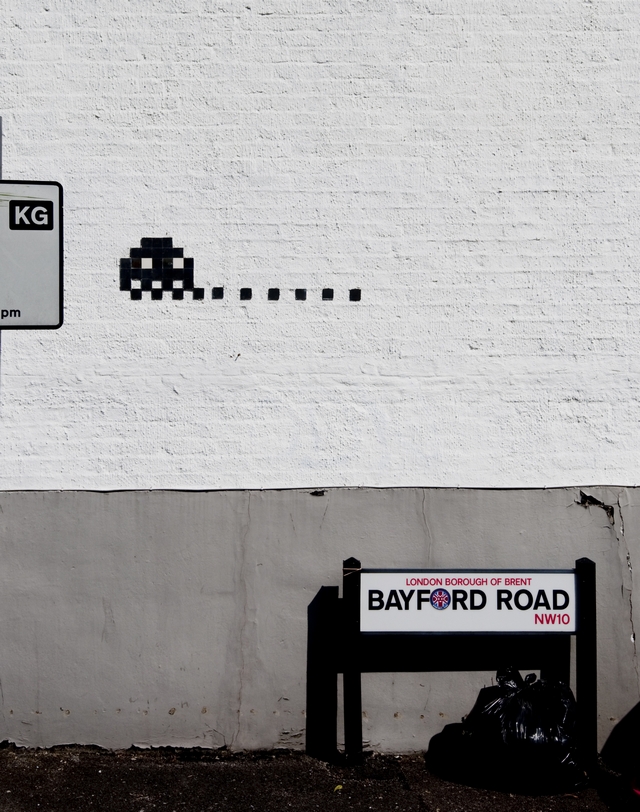 More information and photographs is on the Graffoto blog