Who would win in a fight between a Roa hedgehog and a Banksy rat?  We might find out as there’s a fascinating week in prospect in the world of London galleries who show artists who are more at home on outdoor walls. Steve Lazarides in conjunction with, or thanks to, or despite Sotheby’s is staging a “selling show” of Banksy print and canvas artwork. Steve Lazarides is famously known as the svengali who co-piloted spaceship Banksy to enormous heights until the relationship ended a few years ago. “He’d hate it. It’s about as far removed from something he would contemplate as you could get” says Lazardis though it’s probably not as far off the Banksy Christmas card list as a show exhibiting Banksy’s street works in a boutique hotel basement.

What you will get are about 70 prints and canvasses by Banksy, supposedly the largest exhibition of his work ever but it will be asurprise if it matches the scale of the epic 2009 Bristol Museum and Art Gallery show (which of course was “authorised” Banksy).

Chances of getting to see the private view are virtually zilch, especially if you are reading this the day after tomorrow. “Go and see it when it’s quiet” said my friend on the inside. The last time anything “quiet” happened with Banksy was back in ‘05 when our whole family trotted along to the Crude Oils show with the live rats and just walked in off the street over the weekend. It may be a little different this time.

Roa has to be one of the few street art talents who can rank up alongside Banksy and he has an original show opening head to head in London in the same week as the Banksy retrospective!

ROA first exhibited in London at Pure Evil’s gallery in 2008, a show that propelled him to stardom as we fell in love with these dishevelled, skinned and disembowelled creatures painted on anything but conventional canvas. Stolen Space’s first show in what has now become their home was the cracking 2012 Hynagogia staged before the gallery became the cleaner, whiter two roomed permanent gallery home it is now. This return to Stolen Space sees the Belgian painter create another installation based show which is sure to have us gasping at its unconventional surfaces and grubby dirty creatures. Can’t wait. Also opening at the same time in the other Stolen Space room is “Pentimento” by Max Rippon aka NY street artist/graffiti writer RIPO. Expect top quality graphic art with a graffiti twist. A huge heap of talent there in those two rooms. Both shows:

TRUST.ICON: “Tears of a Clown”

Meanwhile, on the far side of town, Trust.Icon opens Tears Of A Clown, RSVP required. Some of Trust.Icon’s street artsuch as this recent location specific single layer stencil image is top notch. Some not so! Tears Of A Clown

French stencil legend Jef Aerosol surprised the Shoreditch Street Art Tour when he strolled past in a hurry after creating some fresh street art. By chance we happened to meet right at a spot where in 2008 Jef Aerosol put up a long lasting stencil of John Lennon and Mick Jagger. Brimful of excitement, the group was amazed later to find a new piece of Jef Aerosol work on the streets. This pasted image shows two Moroccan Gnawa musicians, Jef visited Morocco last month and it made a deep impression on him and the composition is an interesting addition to the many popular musical legends who have been a mainstay of his work. Further East Jef has done an even better piece of art on the dilapidated and boarded up exterior of an old fishmongers. The images are stencilled onto the wall, not pasted and in addition to a couple of his urchin children there are two fishes rising up and escaping their normal aquatic boundaries, and interesting response to the former use of the site. 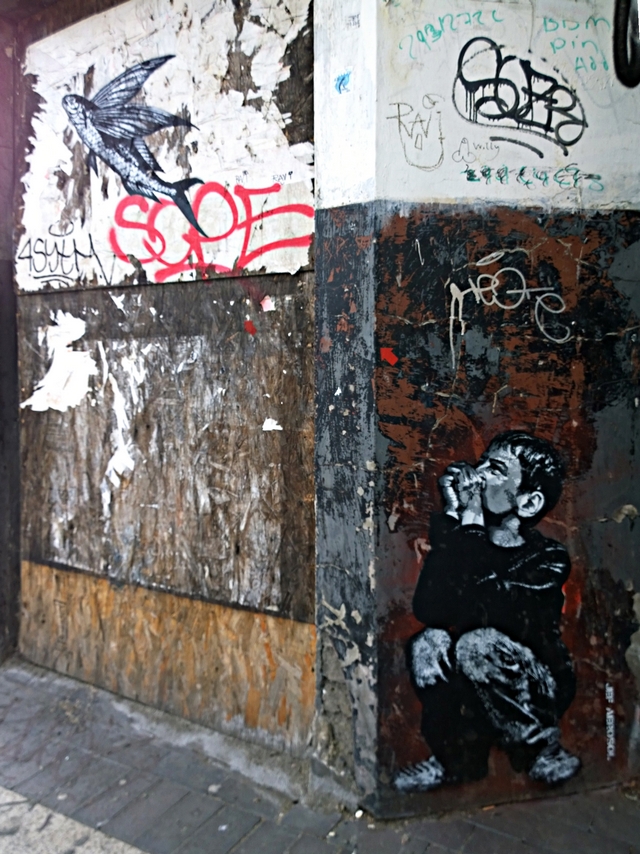 You can view a photographic survey of Jef’s London street art over the years  here.

Jef has had several significant shows in the UK over the past decade, our favourite was probably Spray It Loud in Islington back in 2008.

French street artist Alex Trema is in London placing pieces of free art on the streets as part of a project he dubs “Take me”.  Today Shoreditch Street Art Tours’ guests came across a piece of Alex’s art packaged up on the streets and they did exactly that, they took it! Alex conceived his project while in New York in late Spring of 2013 and has placed free art in Paris, Marseille, Napoli, Lille, Milan and now London!   The London version consists of an image of the late West London icon Joe Strummer, singer with The Clash. Alex likes to see the public becoming a part of his project with their participation in photos of them with the art on the streets, so in his terms our guests are officially a piece of art, but they knew that anyway! All photos by NoLionsInEngland using a Nokia Lumia 1020

On the Shoreditch Street Art Tour we come across many artists whose work is guided and inspired by the street canvas they are decorating. Clet Abraham is a Florence based French artist whose trademark artistic intervention is modification of no entry signs.  Clet’s previous London visits left us very familiar with stop sign’s white bars turned into a heavy load being hefted by a silhouetted figure across the street.   Having found photographic evidence of the range of Clet’s other street sign subversions across Europe, it seemed slightly puzzling that in London he had focussed so heavily on that one image. Thankfully Clet has returned to London and unleashed a huge variety of sign modifications across our junctions.  The London one way labyrinth must be a dream come true for this Italian resident and Clet-spotting has become a great delight for the guests on several street art tours since Friday.

Following on from the recent post about great new street art appearing in Shoreditch in which we hailed the return of illegal art to an old stencil hall of fame, at the other end of the cycle we celebrate the life of a top quality illegal piece of street art which passed on a couple of days ago.

Above created this breakdancer back in the Summer, yup – we did have one this year and someone, presumably the building owner, had covered it in Perspex within a couple of days.  This is what it looked like at night when the perfection of its placement was apparent. Perspex on a piece of street art suggests either that a piece is being preserved for sale or that it is being “conserved”, protected from the rough and tumble of a normal healthy outdoor life.  Usually we infer the former.  Persons unknown expressed their distaste for this kind of curation, or profit preservation – take your pick – and tore most of the perspex off.  Then someone disfigured the piece by chrome spraying an X across the dancer’s body.  Someone else opposed this action by attempting a vigorous cleaning of the chrome off the bricks, looking like an attempt at restoration.  Still with me?

A few days after the clean up started, yesterday in fact, the morning Shoreditch Street Art Tour found that the artwork have been brushed over with a foamy chemical wash. In the afternoon a vigorous buff had been carried out to the point the art was a feint smudge and today there was just a discoloured damp patch where the Above Breakdancer had been. So there you have it, an excellent piece of work lived its life to the full and to a natural conclusion.  Thankfully most street artists are pretty resilient types and aren’t deterred by a bit of buffing.  Where one piece is buffed, five new pieces will rise up to take its place and Mobstr’s High Five remains undisturbed!

Street artists swarmed all over Shoreditch last weekend as Moniker Art Fair took place and the Shoreditch Street Art Tour has been catching up with the results of their productivity this week.

Almost every wall in the Seven Stars Car Park saw a new lick of paint including work by Ser from Greece and  Vinz Feel Free who is based in Spain. Elsewhere, Moniker artists who stamped their mark included Colorado based stencil artist Amanda Marie with this new mural in an off street location. One of our tours chanced upon Amanda Marie with a pile of paper at her feet and some spraycans in a bag and a mischievous gleam in her eye. Within moments the first stencil layer was taped to the wall and sprayed. Returning to inspect the result later in the afternoon revealed an impressive bit piece of combined stencil and freehand spraying. Years ago this wall was one of the best and most frequently painted stencil “halls of fame” in Shoreditch so it is nice to see the return of work being created without a permission slip.

Here’s a lovely crisp and colourful stencil image that recently appeared in Shoreditch and which we found on the Shoreditch Street Art Tour walk today.  The artist is Zabou, a French girl currently living in London.   Nice work carrying the flag for female street artists who are just getting on with it. Zabou posted HERE on her blog about painting this piece, with some interesting work-in-progress photos of the stencils and registration marks.