Back in 2018 the “Street Art Against Hate” project was initiated by a group of artists from Cologne and several years on artists are still supporting that message and that project with new #nohate street art.  When the project led  to the impressive and moving Wall Of Love in Shoreditch in November 2017, Shoreditch Street Art Tours shared the experience of viewing that mural with Patricia and Manuel Oliver whose son Joaquin Oliver was a victim of the Parkland School killings, the same tragedy commemorated and supported by Shephard Fairey. To Live and Let Live, Street Art Against Hate

Graffoto wrote about the moving moments of sharing the positivity embodied in the Wall Of Love with grieving parents from Parkland, Patricia and Manuel channeled the power of their emotions through art to do great things raising awareness of the need for change, here is a wonderful mural they facilitated in Winwood, Miami, interestingly the striking message is clearly very influenced by and in debt to Shepard Fairey’s Obey Giant graphic design. In addition to putting up stickers and paste ups on a visit to London last October, Shepard Fairey created three stunning murals, two in the Shoreditch area and one in Hackney: All other photos: Dave Stuart

Jace is a street artist who puts up charming and idiosyncratic sculptural faces on walls, usually not troubling wall owners with requests for permission.  At the turn of the decade, three weeks ago, Jace revealed he had put up 253 faces in an impressive 47 cities in a staggering 21 countries.   I can relate to this kind of OCD stats collection. This homage piece has by Graffoto’s reckoning been through 5 different manifestations since it first appeared in 2017. The first face on this spot was actually just a lonesome bachelor in February 2017, but he did have a wonderful fresh complexion.

It was joined by its partner in around May 2017 By October 2017 the resilient female had endured a few chips but and chosen a new partner. This partner was tragically and mysteriously taken, our heroine moved on to another new partner in April 2018, this couple were noticeably closer than her previous relationships and now she preferred brown eyes to blue. After a long affair and following the pattern, the gentleman somewhat unchivalrously disappeared leaving the poor lady all alone.  Her next partner in July 2019 wasn’t exactly what you would call a looker but beauty is in the eye of the beholder. Then, unexpectedly, the couple disappeared, maybe they eloped together.   Last weekend a new couple were drawn to this most romantic corner, in fact one would attribute an almost post coital glow to this cheeky pair. So why do these disappear?   As it doesn’t seem to be the council nor is it likely to be the wall owners removing them, the most likely explanation is going to be souvenir hunters.  Sticky fingered street art spotters who think the art would be much better in their private collection rather than enjoyed by its intended public audience.  It’s not all bad news with Jace’s faces, a wonderful story appeared on Jace’s Instagram last weekend about the fate of some small faces in Belfast, Northern Ireland… best told by Jace himself:

Part 1: “In December 2016 I discreetly installed one of my very first ever faces to this wonderful courtyard at Duke of York / Dark Horse Belfast – a creative and humorous space celebrating the people and culture of my city and country. Each year I returned to Cathedral Quarter more and more fantastic murals and installations (by artist @ciarangallagherart amongst others) would appear, and I too would leave another surprise gift in the form of a cheeky face. Some of the faces paid homage to the city, like my H&amp;W giants: Samson &amp; Goliath !”

“At the very beginning of this year (2020) I made a quick visit back to the courtyard before leaving Belfast, and it appeared to me that all of the faces that had been installed over the years had been removed 😦😞☹️ I felt a tinge of sadness (though this is the nature of urban art) because I love this specific place so much, and was about to leave the courtyard when at a final glance down towards the gates something awesome caught my eye…” Part 2: “all those faces installed from 2016 and dotted about the place have been relocated and displayed collectively. Truly awesome! Seeing this just as I was about to leave Belfast I felt immensely proud and overwhelmingly happy, because I enjoy being in this place a lot. And so, of course I had to put one more new face to the bottom of the column…”

When it comes to his small faces, Jace doesn’t do half measures, all told we found 8 small faces from the most recent Jace Shoreditch adventure and for the record, here are the other six beauties. 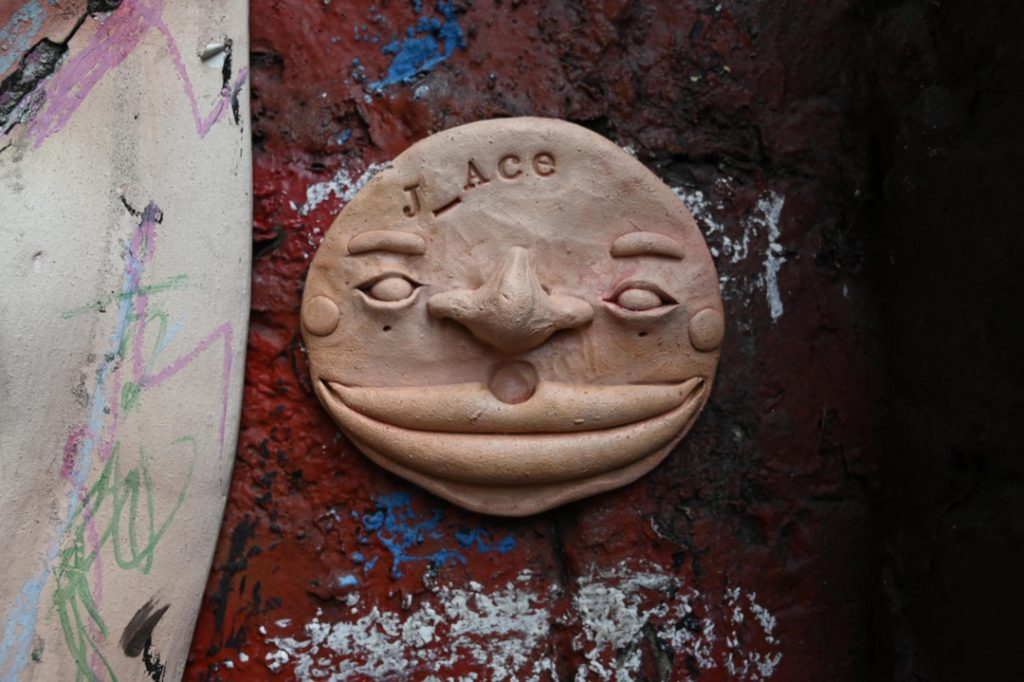 Then small faces in great places were featured again December 2017.

All photos Dave Stuart except Jace where credited.