Two interesting things are coming up which relate to issues often raised on the Shoreditch Street Art Tour.

The first is that this Sunday we celebrate No Ad Day.  Street artists have often cited an anti advertising stance to justify their actions, the essence of the message being “who gave advertisers permission  to hijack public space to bombard us with their advertising messages, we are reclaiming our visual landscape”.  No Ad Day takes the view that advertising is pernicious, not necessarily truthful, overwhelming and a mechanism for artificially stimulating demand in the absence of a natural imperative to acquire based on need.  So this Sunday, in cities around the world including New York, London, Paris, Berlin, Barcelona, Madrid and undoubtedly many more, there is possibly going to be some subtle action to reduce the quantity of advertising. Look out for blank advert spaces, hijacked advert spaces, subverted adverts and perhaps more.   If an ad looks a bit odd, check it out it might just have been hit by someone engaging in a No Ad Day activity.

On the street art tour we often delight in discovering subverted adverts and hijacked advertising spaces, we will certainly be keeping our eyes peeled in London this weekend. 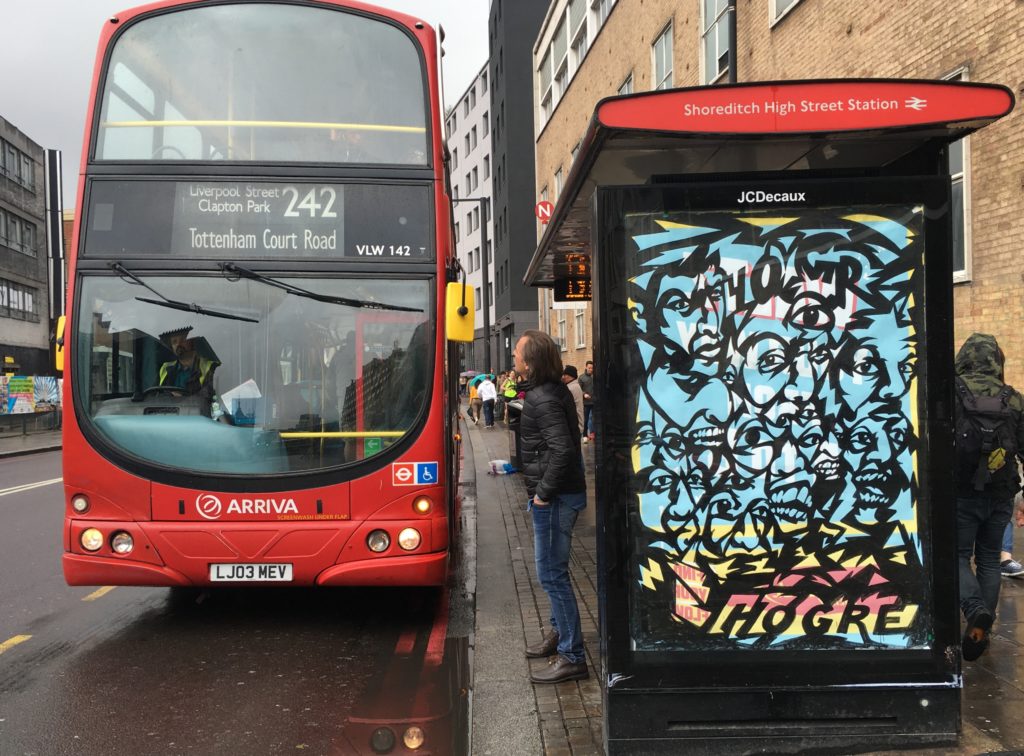 The results of stripping adverts from the urban landscape can be quite impressive, in 2010 the vast quantity of illegal billboards all over Athens, from the Centre to the Port of Piraeus in one direction and out to the airport in the other suddenly whited out.  Whether this was driven by economics or principal, or even possibly but more remotely actually just a clamp down on illegal advertising, it made a huge difference to Athen’s appearance. The second thing I want to let you know about is a rather interesting publication with the awesome title “Advertising Shits In Your Head”.  This is a book to be published by Dog Section Press. Advertising Shits In Your Head combines theory and practice in one short book about the modern subvertising movement.  It will certainly be an interesting read for the curious.  At present a crowd funding campaign is very close to raising the target needed to proceed to publication, if you or someone you know might be interested in this book, do look a bit closer.  Funding deadline date is 28th November, the day after No Ad Day, funding is 85% towards target. You can in effect pre order the book by contributing just £5 to the funding though I’m looking forward to rocking a Dog Section Press Teeshirt on some tours next Summer.

One evening early last month when the campaign was first launched I luckily caught this particularly relevant subverted advertising lightbox in Islington. by @ProtestStencil, photo by Dave Stuart

On the web page for the funding are many other recent updates of subvertising actions, My friends at VNA magazine, my favourite zine got this ace interview from Dog Section Press Editor Vyvian Raoul about the ideas and manifestations of this new wave of artivism.   So, check out the crowdfunding page now and help push the appeal over the line (update – now 93% funded).

Feature Photo via No Ad Day

Photo sources cited, if any photographer would like a credit for their photograph please drop an email