The weekend of 10th and 11th of May saw a huge street art “rehang” in the ever changing gallery of Shoreditch walls.

Despite the rain, the best of London’s spraycan painters had a productive weekend. Jim Vision assisted Louis Masai raising awareness of looming eco-catastrophe with the #saveTheBees mural.

Save The Bees – Masai

Perhaps by chance this was the wall where a few of our finest ran into a spot of bother with the feds the previous weekend, a truly bizarre situation partially rectified this weekend when the wall was painted not once but twice!! This piece featuring Blair Zaye, Ubangibangi and others lasted barely 24 hours.

On Sunday evening, Swizz artist FRA was back in town in company with his compatriot Quendo peppering the walls with a variety of paste up stencils. London silk screen printer and Master Of Scale Donk was out late on Sunday putting up an awesomely composed Westminster Abbey reimagined as the sinister starship Gothica 2! If you are going to go over a long running masterpiece it had better be good, this qualifies.   Look and learn toys! Shoreditch is nothing without its ability to draw high calibre international artists so we are pleased to find this piece from Denver based Bunny M, her lady with unicorn and errrr…antelope? Gazelle? Horns is beautifully intricate and an un-expected surprise. Rounding a corner we chanced upon the French legend Thierry Noir, king of the Berlin wall faces decorating an also legendary panel outside Cargo nightclub. The Shoreditch Street Art Tour Group had an interesting chat with Noir and one of the group had a lovely discussion about a long wall of sad faces they had found in Berlin. Jim Vision also found time to produce this masterpiece collaborating with Martin Ron from Argentina, who maybe was trying to redeem himself for the horror of painting the Hanbury St wall alongside the ROA piece last September. In Slater St car park a huge array of London’s street artists turned out to paint a giant cartoon mural in honour of Captain Kris’ (Lost Souls) birthday. In the mix we can see in no particular order Saki and Bitches (that stands out!) Captain Kris, Irony, Ubangibangi, SP067, Si Mitchell, Himbad, Airborne Mark, Squirl Art, Seeds One, Mr Fan HC, The Real Dill, Lilly Lou, Tonyboy – with apologies to any others left off this list. Also present but not visible in this picture 616.

Too many to shake a stick at “Too much time, not enough sense” Clingfilm artist unknown

Another long weekend, another amazing collection of new street art on the streets of Shoreditch.

Although put up a little before the weekend, this piece by T.Wat received huge press attention as he timed this to coincide with Max Clifford, the most notorious peddler of smut and scandal to the UK tabloids, being found guilty of charges of abusing underage girls and sentenced to 8 years in prison. Already considerably modified and tagged. Unify is a stencil artist who has been getting busy around Shoreditch quite a bit in the past few months, two new pieces appeared over the weekend including this pop at Britain’s Chancellor of the Exchequer (Finance Minister) and his view on the recent budget. We last saw Paris based Monsieur Qui on the streets of Shoreditch in 2010, he evidently is back judging by this awesome paste up we found this morning. Although he has gone over Syd, it looks like Syd’s stencilled girl is poised for revenge. 616 who is always on the look out for unconventional media to paint his tribal characters found a foam mattress but lost his bed. 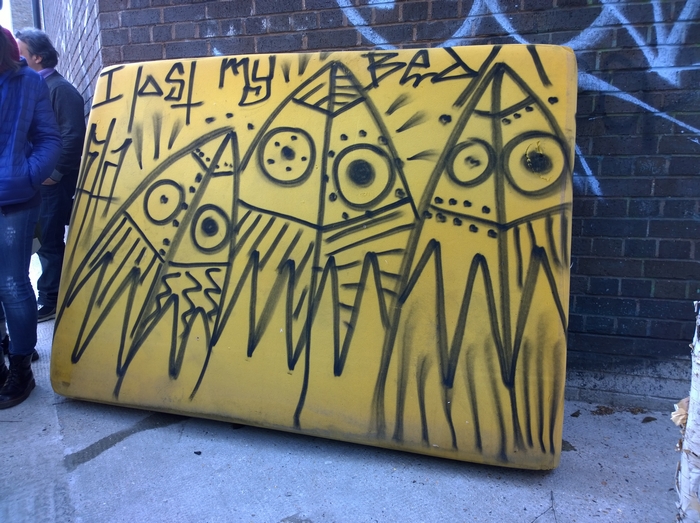 The hard working always up Sell Out added butterflies and some Mary Poppins to Jef Aerosol’s Gnawa musicians. Finally and although again painted just before the weekend but too good to omit on that technicality, we love the humour in Cosmo Sarson’s Caravaggio selfie.